The era of the coronavirus pandemic, as we can probably now call it, has brought a lot of changes to our world and almost fundamentally changed one thing – our ability to meet each other, attend events, visit museums, theatres, and many other places. Most of the previously offline events are now being held in a virtual format. We are getting used to living in a new order, with countless number of online meetings, lectures and exhibitions. Among all this diversity there is one absolutely unique, colourful and exciting event  – an online festival of contemporary Japanese culture J-FEST.

The annual J-FEST festival is the largest festival of contemporary Japanese culture in Russia. , Established in 2009, the eventwas called ‘The Japan Pop Culture Festival’ at that time, and took place in the Dom Predprinimatelya building in Moscow.  The event proved to be quite popular, mostly thanks to Mr Takamase Sakurai who used to work in the Ministry of Foreign Affairs of Japan and who contributed much to the popularisation of the Japanese youth culture. He was joined by one of the most famous Japanese models Misako Aoki. Miss Aoki a symbol of the Japanese ‘Lolita’ subculture and back then was officially appointed the ‘Kawaii Ambassador’ by the Ministry of Foreign Affairs of Japan (‘kawaii’ in Japanese means ‘cute’ and is the name of the Japanese pop-culture trend based on childishness).

Already in its first year, in 2009,  the festival became extremely popular among the Russians. Since then, the festival, renamed J-FEST, has continued to grow and expand, allowing everyone to experience various aspects of the Japanese culture, including music, theatre, cinema, anime, Japanese cuisine, and much more. Since 2017, the festival has been held outdoors, on the square in front of the Garage Museum of Contemporary Art in Gorky Park, in the format of the traditional Japanese summer festival ‘Natsu Matsuri’. The three key components of such a festival are traditional colourful Bon Odori (a folk dance symbolising the gratitude of the Japanese to their ancestors), Japanese cuisine, and the general feel created by the decorations.

Nowadays the Organising Committee of the festival includes the Embassy of Japan in the Russian Federation and the Garage Museum of Contemporary Art. They attract the best specialists that put their experience, expertise and creativity into the development of this large-scale cultural event. Each year J-FEST is visited by approximately two million people. In 2019 the festival was recognised as the cultural event of the year by the Kimono magazine.

The International Chodiev Foundation (ICF) has supported and been the general sponsor of the festival since its inception. This significant project fits into one of our priority areas of work – support and development of intercultural dialogue between Russia and Japan. For his long-standing and prolific work in this direction, this year the ICF founder Dr Patokh Chodiev received two prestigious awards from the governments of the Russian Federation and Japan – the Order of Friendship and the Order of the Rising Sun. J-FEST, along with the Russian culture festival in Japan, exhibitions of Japanese art, theatre tours and other initiatives, is a part of a larger work of the Foundation aiming at promoting Russo-Japanese relations (read more about ICF projects in culture and art here, and about support of research and publishing projects here).

Due to the coronavirus pandemic, organising J-FEST in its traditional outdoor format became impossible this year. It was hence decided to hold it in the online format under the ‘Japan – just a click away’ motto. Having switched to the new format, the festival has become a truly unique event, now in the virtual world. Three-week long extensive programme included 130 events of all kinds – lectures by leading Japanese scholars, film screenings, master-classes on Japanese cuisine, calligraphy, ikebana-making, Japanese language lessons, theatre performances, music concerts, cosplay costume competitions and many more. The great advantage of the virtual festival is the opportunity to expand its geography and to let many more people to take part. You do not have to be in Russia to participate, in fact, you can enjoy J-FEST literally anywhere in the world, from the comfort of your home.

Indeed, organising the festival in a completely new format took a lot of hard work, but it was certainly worth it! The usual square  has been digitally reproduced and the visitors can move around it, ‘enter’ various buildings and pavilions and ‘attend’ an array of events. For example, you can enjoy martial arts or a master class on Go in the ‘Budokan’ sports arena, watch a traditional tea ceremony or listen to a lecture about a traditional Japanese garden in the ‘Tea House’, and watch films about Japan and Japanese culture in the ‘Golden Pavilion’.

For visitors’ convenience, events are divided into groups and themes, with events by a certain theme appearing online on the corresponding day of the week:

In addition to numerous virtual events, the festival website is full of useful and interesting tools and resources for the lovers of Japanese culture. . For example, one can find compilations of the magazines about Japan or links to shops selling Japanese goods and products. There are various contests and competitions with exciting prizes, like a trip to Japan, andone can share their creativity, dress in costumes and much more (please check ‘Asakusa’ district on the virtual map).

Screening of the ICF-supported documentaries

It is worth noting that three documentaries, created with the ICF support, are now showing in the Golden Pavilion:

A full-length documentary film revealing the uniqueness, diversity and contrasts of Japanese culture: traditional and modern Japan, ancient customs and crafts, the perfection and ubiquity of new technology, the secrets of the Japanese way of life and thinking, Japanese cuisine and longevity, as well as much more.

‘On the Way to Trust: Russians in Japan’

Documentary on the history of Russo-Japanese relations and people who played important part in their development during the last two centuries. The film reveals many previously unknown historical facts and unlocks the mystery of the Japanese tattoo of Tsar Nicholas II, the textile genius Itchiku Kubota and his imprisonment in Siberia, the Russian Morozoff chocolate in Kobe, the Starukhin baseball stadium in Hokkaido, among other fascinating subjects.

A film about the genius of textile art, Itchiku Kubota (1917-2003), who dedicated his life to restoring the lost ancient tie-dying technique called ‘tsujigahana’. Kubota had an unusual life and even spent time as a political prisoner in Siberia.

To learn more about Itchiku Kubota, his works and ICF’s work to preserve his legacy, please follow this link.

Written and directed by Radik Kudoyarov.

The new ICF-supported documentary ‘Hokkaido: The Way to the Northern Seas’ will also premiere at J-FEST online festival. The film is dedicated to the largest and northernmost prefecture of Japan, Hokkaido island. Despite its size (equalling the territory of Austria), it is one of the least populated islands in Japan, with the population of only 5.2 million. Hokkaido is famous for its extraordinarily beautiful nature,due to its unique climate and geographical characteristics., Its mountains, lakes and waterfalls create other-worldly landscapes. Due to its proximity to Russia, people of Hokkaido are especially interested in partnership and cultural exchanges with Russia.

If you have not visited J-FEST Online yet, we strongly recommend you to take advantage of this unique opportunity right now – the programme will run until 5 December. This fascinating and colourful festival, which showcases the richness and diversity of Japanese culture, will surely not leave anyone indifferent. 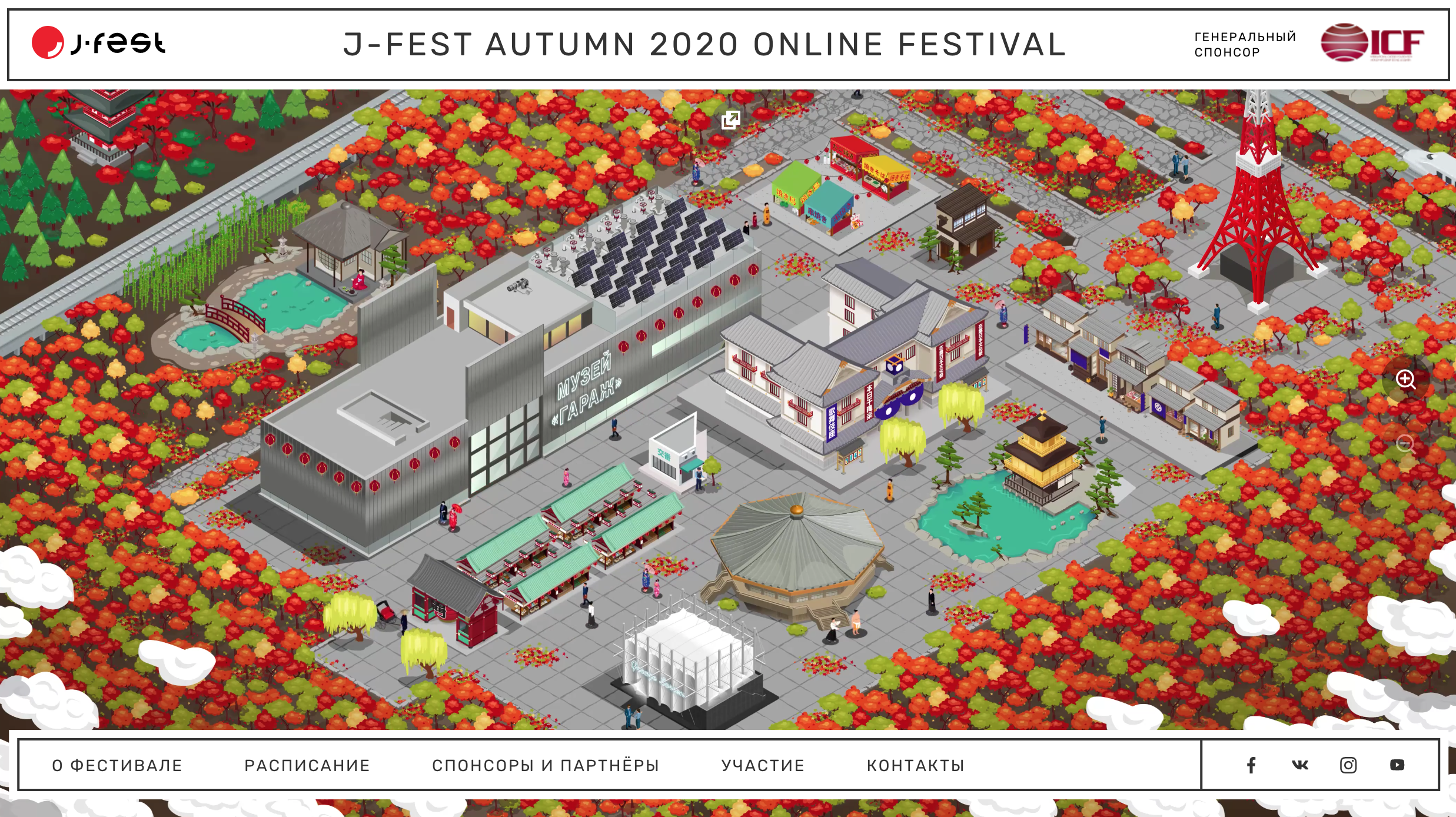